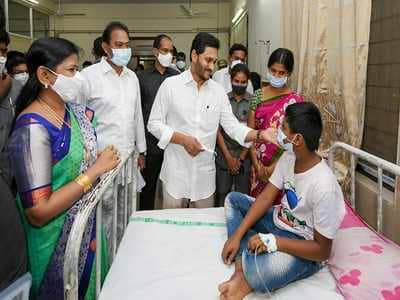 At least one person has died and 227 have been hospitalised by an unidentified illness in Andhra Pradesh’s Eluru town.

Nearly 300 residents were hospitalised with complaints of giddiness, while 117 were discharged after fully recovering, since Saturday

Most of the cases of Eluru disease reported were from Kobbari Thota, Kothapeta, Toorpu Veedhi and Arundhatipeta districts. The cause of the sickness is yet to be determined. However, officials believe that poisonous organic substances could be the most likely cause of the disease.

There is no sign of contagiousness in the mystery illness till now, said West Godavari district collector Revu Muthyala Raju on Monday

After hundreds of people were hospitalised with complaints of multiple symptoms, Andhra Pradesh chief minister YS Jaganmohan Reddy on Monday visited Eluru Government Hospital and assured them of all help.

Water and milk samples were also sent to the Centre for Cellular and Molecular Biology in Hyderabad for analysis of heavy metal content, sources in the Medical and Health Department said.

A central team is set to visit the state on Tuesday to investigate this mysterious illness, said an office memorandum issued by the Union health ministry on Monday. The team will be submitting a report by tomorrow evening.

With water contamination ruled out as the cause of the disease spread, and also other tests turning out normal, the medical teams are now focusing on other chemical agents that could have led to the outbreak.

Organochlorine pesticides are chlorinated hydrocarbons used in agriculture and mosquito control. The compounds include DDT that is widely used in anti-mosquito fogging. “Mostly yes, but we are waiting for the laboratory report (for confirmation),” a top official said when asked about organochlorine being the disease-triggering agent. BJP MP G V L Narasimha Rao, after talking to experts at the AIIMS, New Delhi, was the first to suspect that poisonous organochlorine substances could be the most likely cause of the mysterious disease.

Chief Minister YS Jagan Mohan Reddy will visit Eluru today to take stock of the situation. The Governor Biswa Bhusan Harichandan also expressed concern over the incident and enquired with the local administration about the condition of those admitted to hospitals.

The authorities have readied over 100 additional beds at Eluru Government Hospital in preparation for more potential patients being admitted.

Expanding Use of Recycled Water Would Benefit Human Health