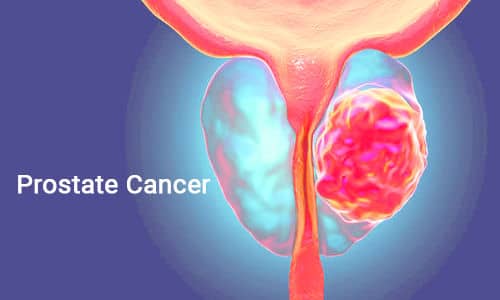 It is the most common malignant tumor in humans. However, prostate adenocarcinoma only ranks third among cancer deaths. Indeed, its evolution is variable and thanks to early detection and adequate treatment, this disease is now effectively combated.

Some prostate cancers grow slowly while others tend to spread quickly. The degree of aggression is thus very variable. The likelihood of contracting such a disease increases with age. Depending on the progress of the cancer, there are different treatment options.

“The hormonal medication does not make the adenocarcinoma of the prostate disappear and therefore requires regular monitoring of the patient.”

The hormonal medication does not “eradicate” the adenocarcinoma of the prostate and thus requires regular monitoring of the patient.

When the tumor is located in the prostate (stage T1 and T2), the current standard treatments are surgery and external radiotherapy.

This surgical solution involves removing the entire prostate, seminal vesicles, vas deferens, part of the bladder neck and surrounding lymph nodes. When prostate cancer is localized, it is the gold standard treatment for young patients. This ablation is done during a relatively heavy operation (3 to 4 hours) but very well controlled. Thirty-day postoperative mortality is currently less than 1% in patients less than 75 years of age in good general health. In terms of efficacy, the 10-year survival is about 90%. However, this treatment has side effects which are mainly impotence and urinary incontinence.

“Contrary to what was previously believed, these two complications can subside for up to two years after operation 1. Patients should therefore be encouraged and informed that improvement in their condition can last for months. or years after the operation.”

External beam radiation therapy involves exposing the prostate region to irradiation. These very high energy rays create lesions in the DNA of the cell nucleus. Faced with this aggression, healthy cells react thanks to a less effective repair system in cancer cells. Thus, radiotherapy preferentially leads to the death of cancer cells. This treatment does not require anesthesia and is usually delivered in regular sessions over several weeks.

In terms of efficacy, the 10-year survival is 70%. Complications can be inflammations (proctitis which is an inflammatory process of the rectal mucosa), intestinal, urinary, sexual (erectile dysfunction) and urinary tract.

“External beam radiation therapy is recommended for patients who are older or have other health problems.”

Recently new techniques have been developed with the aim of minimizing the side effects and complications of the two reference treatments.

Among the latter, we note:

It is predominately used as to provide an extra dose in addition to EBRT (known as “boost” therapy) as it offers an alternative method to deliver a high dose of radiation therapy that conforms to the shape of the tumour within the prostate, while sparing radiation exposure to surrounding tissues.

is a technique currently used and accepted by the latest recommendations from the High Authority for Health (HAS) and the National Cancer Institute (Inca);

It currently represents an alternative to external radiotherapy, with specific indications.

has also developed and currently represents an alternative in curative treatment for tumors at low or even intermediate risk. Less aggressive than prostatectomy, it is done under general anesthesia and echo guidance.

All these techniques have the advantage of being less invasive and currently, their place is better defined according to the extent of the tumor and the age of the patients. For the time being, robotic laparoscopic surgery or not, does not seem to show any superiority over other surgical techniques, even if it is less traumatic.

A Lot of Lives Lost after Common Heart Procedure

Your Tongue is Resposible for your Lack of Sleep