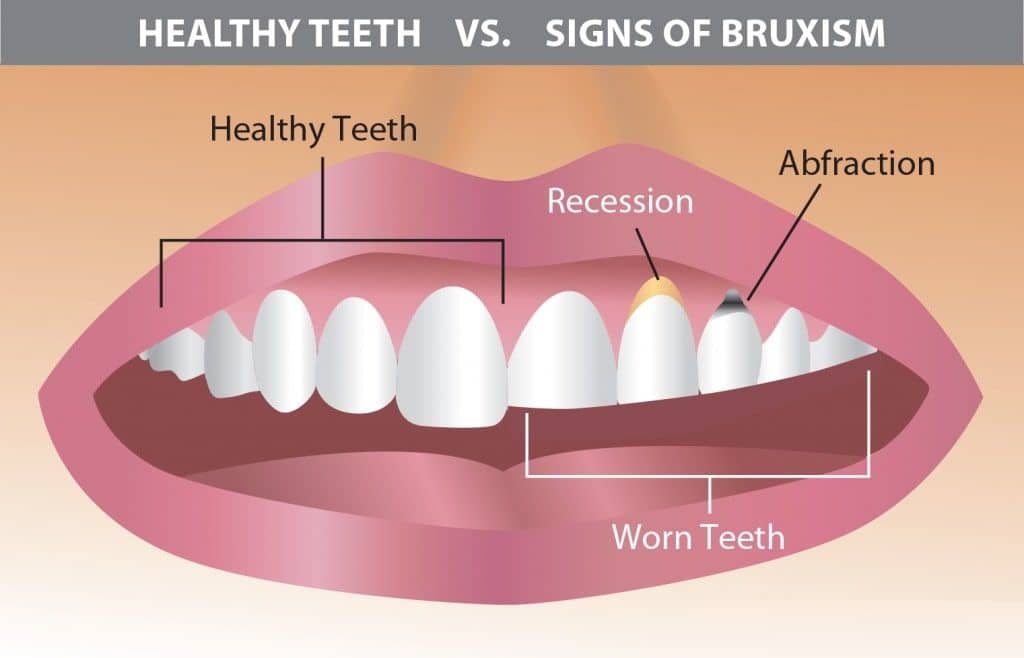 Bruxism is the unconscious grinding or clenching of the teeth that occurs most often at night.

It is particularly common among people under the age of 40, especially females, and decreases over the age of 65.

The causes and origins of bruxism are still a subject of discussion.

Bruxism is an uncontrollable functional disorder resulting in the grinding and clenching of teeth.

It is a temporo-mandibular dysfunction.

It is considered a parafunction: an activity that occurs arbitrarily with no purpose.

This activity often occurs at night (nocturnal bruxism) but can also occur during the day.

There are two types of bruxism:

This occurrence is the result of the manducatory muscles contracting outside of the mastication.

Stress and anxiety can lead to bruxism.

According to the journal of periodontology and oral implantology [1], ” Bruxism could be the manifestation of anxiety, life troubles and frustrations”.

According to the AAP (American Association of Psychiatry), bruxism can be linked to a behavioral disorder [2].

It can also be associated with sleep disorders (insomnia…).

How to diagnose bruxism

Usually, the spouse hears the grinding sound when the bruxer is asleep.

Bruxers usually complain from facial pains, especially in the jaw.

Does bruxism only occur at night?

But, some patients manifest parafunctions during the day.

In the morning, bruxism consists of the clenching of the jaws.

At night, it consists of grinding and friction.

In some exceptional cases, in patients with neurological disorders or brain damage, bruxism manifests itself by a diurnal grinding.[3]

How to treat bruxism?

Bruxism itself isn’t treatable. The treatment focuses on dealing with bruxism’s consequences and preventing its damage.

In the future, we hope that medication influencing neurotransmitters will be developed, limiting the grinding and destruction of the teeth.

When the destruction is advanced causing infectious or esthetic problems, a dental restoration will be necessary.

How to prevent bruxism?

It is possible to limit or prevent the effects of grinding by using occlusal gutters.

In some cases, botulinic toxin (Botox) is used to relax the manducatory muscles.

Relaxation sessions and psychotherapy can also be beneficial for bruxers.

Are kids concerned by bruxism?

Kids are indeed concerned by bruxism. It is possible to encounter completely abraded milk teeth.

It is necessary to consult a doctor as soon as possible.

What are the risks for oral hygiene and general health?