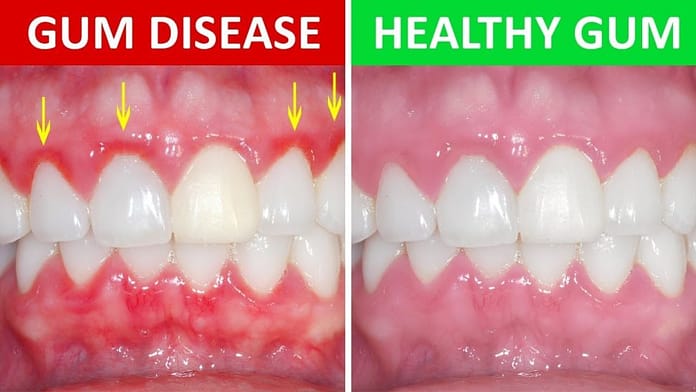 1.Periodontitis, an unknown cause of tooth loss

2.Periodontitis, a factor in chronic illnesses

Contrary to common beliefs, tooth decay is not the principal cause of tooth loss.

Periodontitis is a grave condition that can lead to tooth loss as well as jeopardize the general health condition. This illness is usually unknown to the majority.

Periodontitis, an unknown cause of tooth loss

For adults, periodontal disease is the primary cause of tooth loss. This disease is an infection caused by the proliferation of unhealthy oral bacteria towards a permissive immune response.

More than 40% of the population have feared the loss of their teeth [1]. The women and the elderly are the most concerned by this fear. And yet, few are knowledgeable about periodontitis and its link to tooth loss.

Its symptoms do not seem alarming for the majority:

Given these numbers, associations such as SFPIO (French society of periodontology and oral implantology) are trying to raise awareness of the periodontal disease and its consequences on dental health as well as general health.

Periodontitis, a factor in chronic illnesses

According to numerous studies, periodontal disease could enable chronic illnesses such as:

According to a survey, 4 out of 10 people consider that oral problems could be risk factors for other diseases.

Periodontitis is a widespread disease. More than 80% of adults between the age of 35 and 44 suffer from periodontal disease.

The disease is characterized by chronic inflammation of the tissues surrounding and supporting the tooth. It does not affect the tooth itself.

When the inflammation affects the gums, it is called gingivitis. Untreated, it reaches the deep periodontium and causes the irreversible destruction of the supportive tissues. It is then called periodontitis.

The alarming symptoms are:

If you notice any of these symptoms, it may be wise to consult your doctor.

2: “Association between periodontitis and arterial hypertension: A systematic review and meta-analysis”, Martin-Cabezas R and al, 2016 Oct.

4: “A Systematic Review and Meta-Analysis of the Association between Rheumatoid Arthritis and Periodontitis. Front Immunol.” Fuggle Nr and al, 2016.

Preventive Surgery for Women at High Risk of Breast Cancer

Aging Happens Faster with Poor Diet and no Exercise